Excerpted from “Avoid the Trap! — Experts Round Up Today’s Top Mindless Eating Pitfalls”
By Sharon Palmer, RD in Today’s Dietitian

“…At the crux of the mindless eating philosophy is the notion that people don’t just overeat because they’re hungry. Wansink’s research showed that people overeat because of a multitude of factors, including the influence of family and friends, the size of food packages and plates, the way foods are described on labels and packages, the position of light on food, the colors of foods, the presence of candles, the shapes of food packages, food smells, distractions while eating, distances from which food is available, whether food is stored in cupboards, and the containers in which food is served or stored. Unlike in your grandmother’s time, today’s average person makes nearly 250 decisions about food every day, often without much thought.

“The danger in mindless eating is that it is hand-to-mouth, unconscious munching. When you are not aware of how much or when you are eating, it often leads to overconsumption of needless calories, a disregard for natural hunger and fullness cues, and inevitable excess pounds on the scale or inches on your waistline,” says Victoria Shanta Retelny, RD, who writes and teaches about mindful eating and will release her first book on healthful eating next year…

1. The Ubiquity of Convenience

“The big thing is convenience of food. You can conveniently microwave meals … just about anywhere you want,” says Wansink. It’s true: People no longer have to feel hungry because food awaits them at virtually every corner—from the office vending machine and lobby food cart to the gas station and fast-food stop. The availability of food is forever expanding, making it even easier for people to mindlessly eat wherever their path takes them.

Retelny adds, “Cafés [and] coffee and snack shops are everywhere you go, such as bookstores, grocery stores, hardware stores, and museums. You never have to travel far to find food, even if you are not hungry.”

2. Nutrient-Poor Foods for the Taking
It wouldn’t be so bad if mindless eating triggers targeted nutrient-rich foods that pack a healthful punch. But in reality, mindless eating usually involves high-calorie junk foods. People need only check out the food inventory available at their local gas station or on food commercials during prime-time TV.

Henderson says, “Environmental cues to eat a lot of convenient, cheap, calorie-dense but nutrient-poor foods continue to overwhelm us. These foods are available almost everywhere at almost any time. They continue to be heavily marketed, especially to children.” 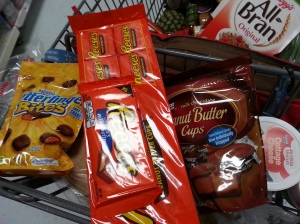 3. Megaportions Still Reign Supreme
“We still see huge portions everywhere—in restaurants and in packaged foods sold in stores,” says Henderson, who offers the example of “individual-sized” bags of chips, which typically contain two or more servings according to the label.

Packaged foods constantly fool consumers; for example, many food labels suggest that people cut individual pizzas, cookies, and microwaveable soup and noodle bowls in half, even though users may not notice the fine print on the label. And the “small plate movement” hasn’t appeared to make a measurable difference in some restaurant franchises. Some Panera Bread sandwiches have morphed into roughly triple the size of a standard sandwich, Jamba Juice “Power” servings of smoothies pack in 30 oz and 580 kcal in some varieties, and Outback Steakhouse serves a whopping 14-oz rib-eye steak that contains almost 1,200 kcal in meat alone.

Retelny adds, “In buffet-style restaurants, the ‘get your money’s worth’ syndrome abounds.”

4. Cheap Food
It’s easy to mindlessly eat when food purchases don’t break the bank. People can simply slip a little goody into their handbag or pocket for later, and they probably won’t even feel an economic pinch. If they think back in time, they might recall that this wasn’t always so.

Wansink says, “Food is really cheap. Fifty years ago, food took up 24% of your income. Now it takes up 6% of your income. As a result, you can buy anything you want. If you feel like a big candy bar, you can buy it.” Although Wansink isn’t for turning back the hands of time to an era when purchasing sufficient food supplies was even more difficult than it still is today for many lower-income families, he does believe that the abundance of cheap, low-quality foods has helped promote mindless eating.

5. Slurping Calories
Sugary beverages have received much attention in the war on obesity, and rightly so. People who drink one or more sodas per day are 27% more likely to be overweight than those who do not drink soda, and soda accounts for 43% of the increase in calorie consumption over the past 30 years, according to the UCLA Center for Health Policy Research and the California Center for Public Health Advocacy.

But how does this become a mindless eating issue? People don’t tend to compensate for calories consumed in beverages by cutting back elsewhere. And these days they can swill a 750-kcal coffee drink, sip on sports or energy drinks during the day, and swig from gigantic soda fountain cups on the way home. All of those beverage calories can go down quite mindlessly. Henderson also points to confusion when people read sugar-sweetened beverage labels, which often suggest two servings per individual bottle.

6. Labeling Guides That Backfire
Although numerous organizations have attempted to create package or shelf labeling systems that guide consumers to make more healthful choices, Wansink fears that such front-of-pack labeling programs might backfire. He says, “It’s easy to look at something and stop thinking and overact in other ways.” For instance, if people see a “green light” nutrition symbol on a food product, that may give them the signal to eat as much as they want, which can lead to much more eating dysfunction. Professionals have seen this sort of eating behavior in the past. Remember when people thought low-fat cookies were “healthful” and thus felt less guilty about eating the whole box?

7. Eating as a Side Activity
Painter believes that one of the biggest mindless eating traps today is “eating and doing something else, such as driving or watching TV. You’re eating without thinking. If you have an endless supply of food and you are paying attention to something else, it’s hard to stop eating.” People engage in much mindless eating during daily activities such as cooking dinner, watching a child’s soccer game, checking out YouTube, or working at their desk.

Henderson suggests, “Have a rule that eating is something you do while sitting down at a table in the kitchen, in the break room, or at a picnic table—in other words, somewhere designed for eating. You’d be surprised how much mindless eating you cut out. Plus, you’ll actually notice and enjoy your food.”

8. Mindless Grocery Shopping
Mindless eating can also hinge on how people shop for food. “Grocery shopping without a plan or list or while hungry or tired is a problem,” says Henderson. “Without a plan in this situation, we are vulnerable to marketing and product placement and tend to bring home more unhealthy foods. Once they are in the house, the battle is lost. If you don’t want it to be part of the family’s regular diet, don’t bring it home in the first place.”

Henderson suggests that if people want to enjoy a specific treat with their family, they should bring home only the amount they want their family to eat and leave it at that. Families might also go out for their special treat so they’re not stuck with leftovers that need to be polished off.

“That way, intake of the less-nutritious foods are at least a planned event rather than mindless snacking,” Henderson explains.

9. Club Store Binges
Many people are attracted to club stores for their reasonable prices; doing the math proves that the price per serving is a great bargain. Unfortunately, those large bins, boxes, bags, and crates of food can end up prompting mindless eating. It’s hard for people to stop at a 1-oz serving of chips when faced with a mammoth-sized bag. And when their freezer is jam-packed with unhealthful meal items, who’s to notice how many they eat each week?

Wansink has observed a phenomenon that occurs when people have a large volume of one particular food on hand: They have a desire to use it up, even if they don’t really like it.

Retelny adds, “As if the large-sized purchases at warehouse stores aren’t enough, you sample food while you shop and before leaving are enticed by a food court laden with high-fat, sodium-laden, sugary treats on the way out of the store—another opportunity to eat!”

Wansink suggests people who shop at club stores individually portion the items for storage as soon as they get home so they won’t be tempted to sit down with gigantic bags of food.

10. Appetizer Overload
People may find it hard to resist a sample of food when they’re waiting for dinner. That’s why Retelny singles out free appetizers at restaurant tables, such as chips or bread and olive oil, as a tempting mindless eating trap. This can even occur when people are dining at a friend’s house; they might find it hard to resist those cheese trays and hummus and pita bread platters when they’re mindlessly eating while socializing. By avoiding the chip bowl or bread basket when dining out and positioning themselves farther from the appetizer tray at social events, your clients can better avoid this mindless eating pitfall. 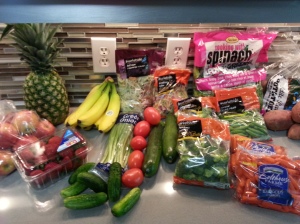 The Work Ahead
There’s more work to be done to change society’s eating environment and behavior. But Painter says that people should start by working on their own eating environment first. “If you change your diet environment, you will eat less. We can change our own microcosm, whatever we can control so that food is not everywhere,” stresses Painter.

…It shouldn’t be that [children] can never have the things they like because then they wouldn’t eat school lunch. But we can keep nudging them to eat the healthier stuff.” In particular, Wansink urges for smarter lunchrooms. For example, he reports his findings that if you put fruit in a nice bowl, turn on a light, and make kids walk past it, you can increase fruit sales by 101%. (Readers can visit www.smarterlunchrooms.org for more mindless eating tips for the school lunch program.)

The knowledge base on mindless eating can also move in a more positive direction. Painter says, “That’s the next step. We need people to start eating more of the good things. As long as we understand what makes us eat more, we can understand how to eat more fruits and vegetables. You can decrease obesity by increasing fruit and vegetable consumption.

In a world of mindless eating traps, dietitians certainly have their jobs cut out for them. But perhaps by recognizing the most pervasive land mines, (we) can learn how to sidestep them and begin to eat more mindfully.”